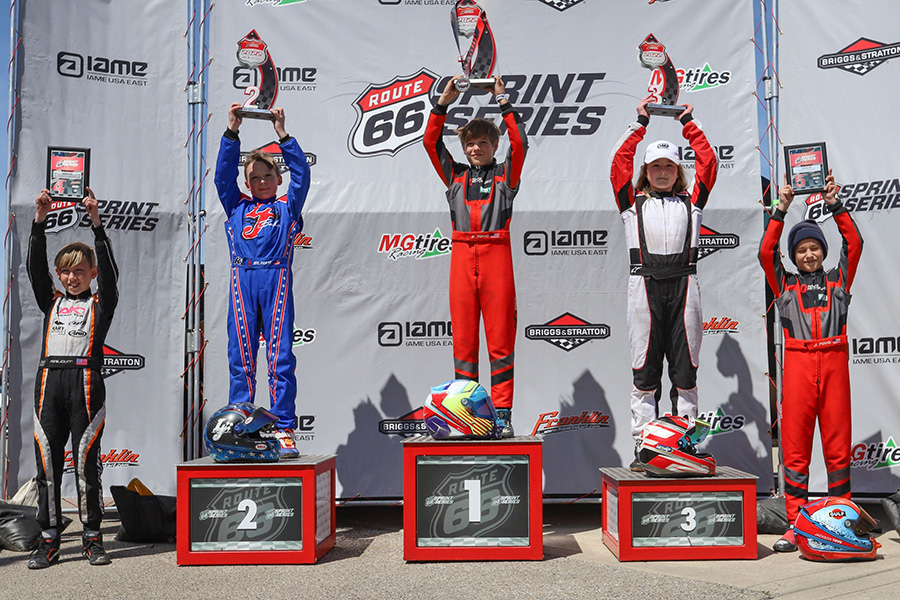 The 2022 Route 66 Sprint Series – presented by MG Tires, Franklin Motorsports, Louisiana Grills and Mills Pallet – opened over the April 9-10 weekend at the New Castle Motorsports Park. The event – presented by RLV – at the New Castle, Indiana facility hosted Rounds One and Two on the ‘Backward 1’ layout. Weather conditions were unique, with colder temps on Friday practice and Saturday, including morning frost and snow flurries during qualifying. Temperatures warmed up for the second round of racing on Sunday to close out the opening weekend for the eight-round championship program, featuring several double winners over the two days of competition.

Defending Woltjer Racing Engines KA100 Senior champion Brandon Lemke began the new season with a two-win performance at the season opener. The event-high field of 40 drivers was led by former race winner Alexander Kardashian, posting a 1:14.870-lap that was quicker by over six tenths to the next driver Lucas Smalec. Kardashian fell to third in the Prefinal as Smalec and Austin Jurs led the first three laps before the polesitter moved back to the point and the race win. Lemke, who qualified 13th, worked up to fourth in the eight-lap heat race. Kardashian once again found himself trailing at the start of the 10-lap Final, back to fourth with Nicholas Terlecki and Emerson Reed now fighting for the top spot. It wasn’t until lap seven that Kardashian retook the top position with Lemke following through for second. Lemke then took the spot over prior to the white flag, holding on to take the victory by just over one-second. Terlecki finished second with Jurs in third. Kardashian and Josh Hotz completed the top-five. 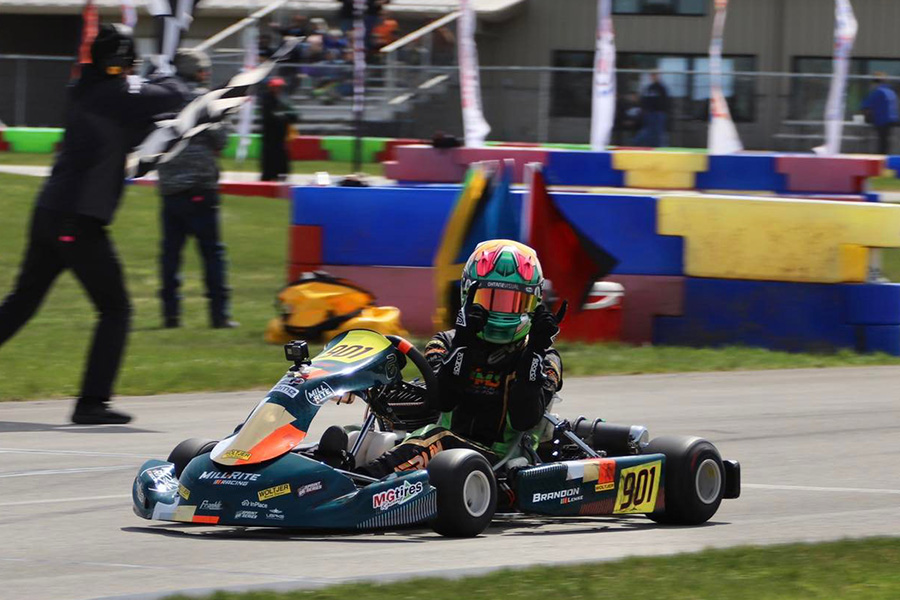 Jurs was the driver to beat to begin Round Two on Sunday as he set fast time in qualifying and won the Prefinal over Terlecki and Lemke. Jurs went on to lead the opening 11 laps of the 12-lap Final. Lemke would work past Jurs for the lead on the final circuit, going on to score the victory and record fast lap of the race. Kardashian slipped by for second but was dropped to third for a partial pushback bumper penalty, giving Jurs the runner-up spot. Terlecki ended up fourth with Bryce Mersberger in fifth.

The Advance Design KA100 Junior class nearly matched the entry total with 29 drivers competing on the weekend. Eli Warren and Charlie Stines led the way in qualifying to open Saturday. Ava Hanssen, who qualified fourth, worked up to the point in the Prefinal to take the win over Warren. Hanssen was moved down to fifth on the opening lap with Stines taking over the lead for the first three circuits of the Final. Warren took over the point on lap four, and from there went on to take the victory. Fast laps of the race helped him to drive away to a five-second advantage over Henry Wheeler with Hanssen in third. Stines ended up fourth ahead of Luke Powers. 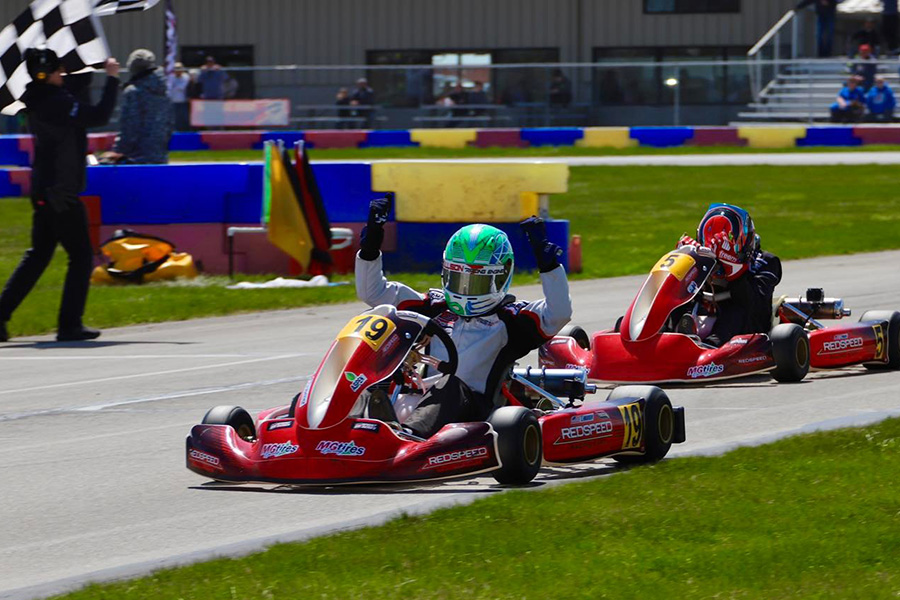 Austin Olds put himself up into the fight on Sunday with fast time in qualifying, clearing the field by over two tenths. He would be dropped down the order on the opening lap of the Prefinal as Luke Powers showed the way, holding off Stines by eight hundredths at the line for the win. Powers then set the pace for the 12-lap Final, leading the opening 11 laps. On the final circuit, Warren was able to work by for the lead and a second victory on the weekend. Stines improved to third with Lovisa Landin in fourth and Wheeler in fifth.

A total of seven drivers left the opening Route 66 event with two wins in the same category. Mick Gabriel was able to earn both wins in the Briggs 206 Medium class by Mill-Rite. Gabriel was over one-second quicker than the 19-driver field in qualifying for Saturday, however, the race in the Prefinal was close. Adam Maxwell edged out Gabriel for the race win. Maxwell led the first half of the Final before the action heated up between, he, Gabriel and Clay Settles who fought for the race win. In the end, Gabriel held on by 29 thousandths at the checkered flag for the victory over Maxwell. Settles had fast lap of the race, placing third ahead of Jerry Fandrey and Vince Scatena. 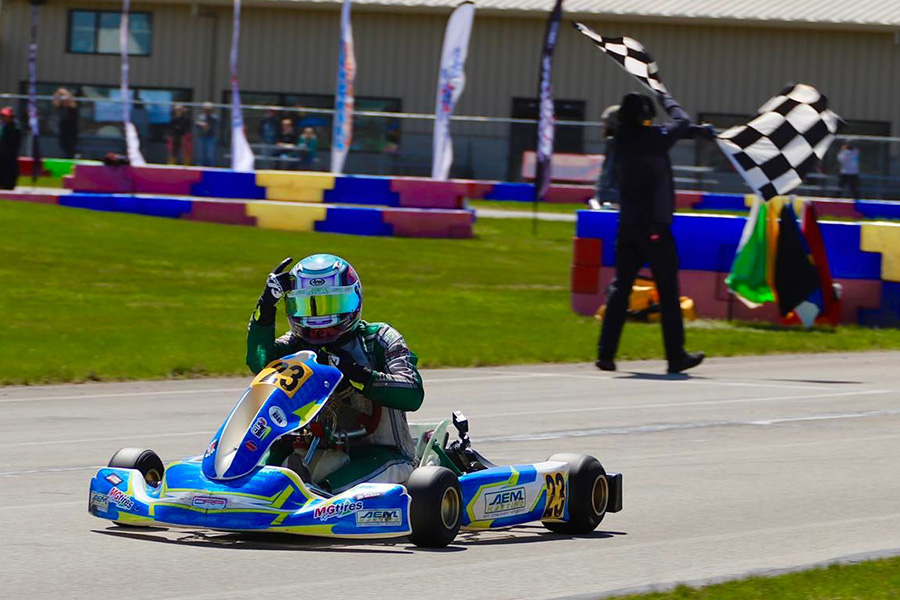 The results on Sunday for Round Two were very similar. Gabriel set fast time in qualifying with Maxwell winning the Prefinal, all with Settles in the fight. Maxwell led the opening 10 laps of the Final before Gabriel took the point. A solid final two laps put Gabriel ahead at the checkered flag by three tenths over Maxwell with Settles in third. Brayden Johnson was fourth with Fandrey in fifth.

The weekend was the introduction of the new KA100 Masters class sponsored by Franklin Douglas. Randy Klimek was the driver to claim the first pole position award with Laurentiu Mardan the provisional winner in the Prefinal. A one-position penalty for a pushback bumper gave Klimek the race win. Mardan would go on to lead the final seven laps of the 10-lap Final to become the inaugural class winner. Roman Padans was second with Klimek in third posting the fast lap of the race. William Vorpagel and TJ Nevles completed the top-five. 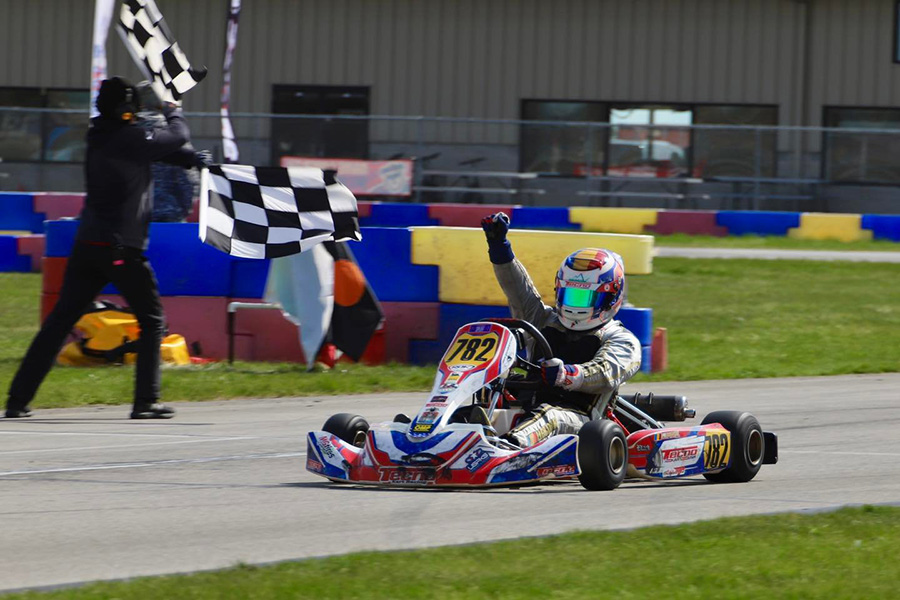 Mardan was able to sweep the Round Two action. After setting fast time in qualifying and winning the Prefinal, Mardan went wire-to-wire in the Final. Jake Feder set fast time in the race, driving to second ahead of Nevels. Padans was fourth with Klimek in fifth.

The Quickswim Micro Swift class welcomed a new winner as Cameron Marsha won both main events over the weekend. Marsha was the top qualifier to begin Round One, quicker by over three tenths over the 18-driver field. Caleb Tarter was able to beat out Marsha for the win in the Prefinal. The two swapped the top spot before Tarter was able to take the provisional victory. He would be removed from the results following tech, promoting Marsha to the top step of the podium. Holden Harder was second with Christopher Youtsey in third. AJ Stoner and Isaac Nowlin completed the top-five. 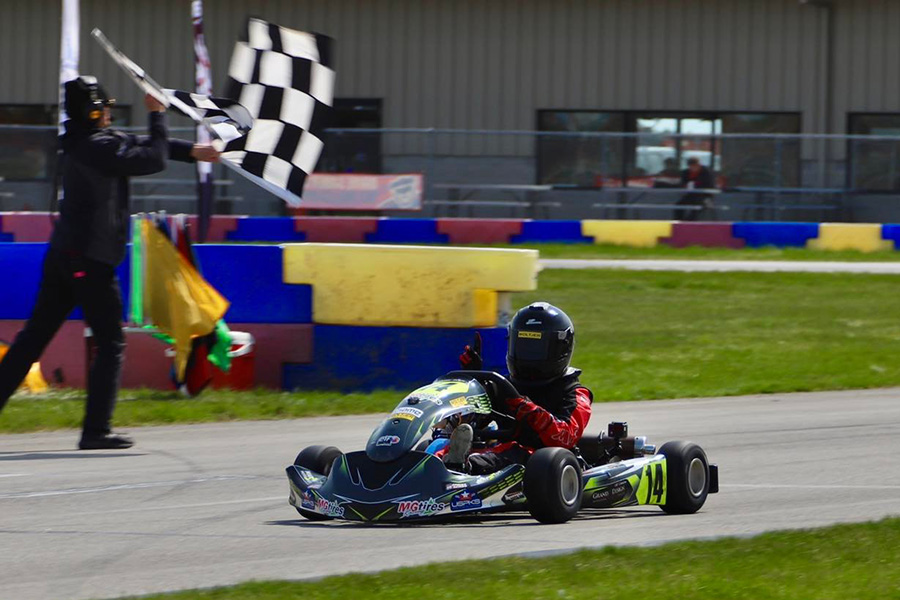 Sunday results were very similar, this time with Tarter earning top qualifier honors and Marsha winning the Prefinal. In the Final, Marsha led the final 10 laps of the Final to drive away to a seven-second advantage over Tarter. Jacob Modjeski improved to third with Stoner fourth and Harder in fifth.

The Perkins All Star Briggs 206 Sportsman class welcomed 21 drivers on the weekend. Christopher Youtsey set fast time in qualifying before Landon Buher led all eight laps in the Prefinal. Buher continued leading the way in the 10-lap Final, going wire-to-wire for his first series victory. Sarah Bradley improved up to second with Youtsey in third. Isaac Malcuit set fast lap in the race to finish fourth with Ezekiel Haight in fifth. 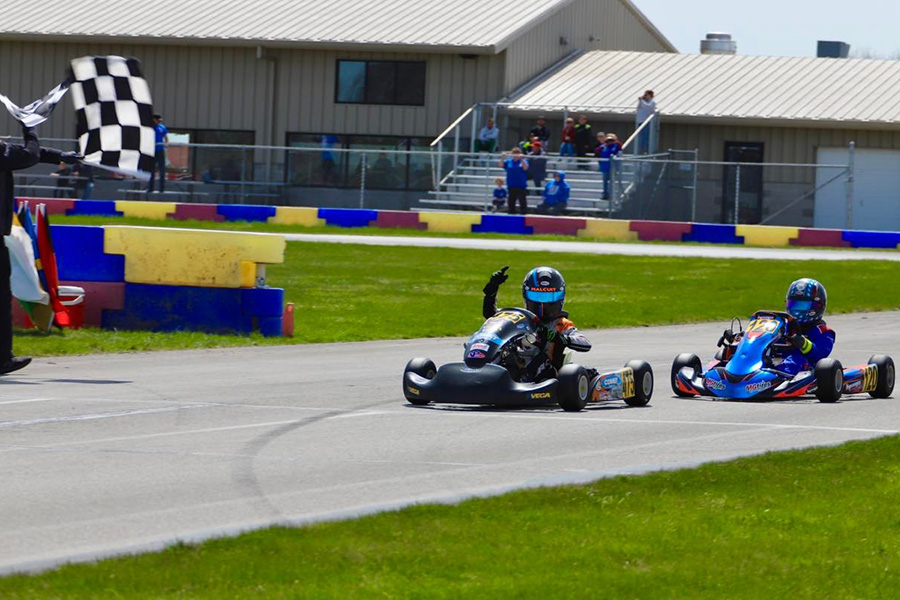 Sunday for Round Two action was a sweep by Isaac Malcuit. After setting fast time in qualifying, Malcuit came away with the Prefinal win after a seven-lap battle. Buher put on the pressure again in the Final, as the two swapped the lead multiple times. Malcuit took the lead with three laps remaining and led the rest of the way for the victory. Buher made it close at the end, coming up seven hundredths short at the line. Youtsey was third with Haight up to fourth as Ty Arbogast completed the top-five.

Two drivers made their graduation to the Briggs 206 Junior class sponsored by One Powersport memorable with victories on their class debut weekend. The 2021 Briggs 206 Sportsman champion Ava Hanssen cleared the 13-driver field by four tenths in qualifying before winning the Prefinal after leading all eight laps. Behind her was Junior rookie Indy Ragan, who kept the pressure on Hanssen throughout the Final. Hanssen led the opening nine laps of the Final before Ragan slipped past on the final circuit for the lead and the victory. Hanssen ended up second with Eli Warren in the third spot. Cody Lindstrom was fourth with Ashton Henckel in fifth. 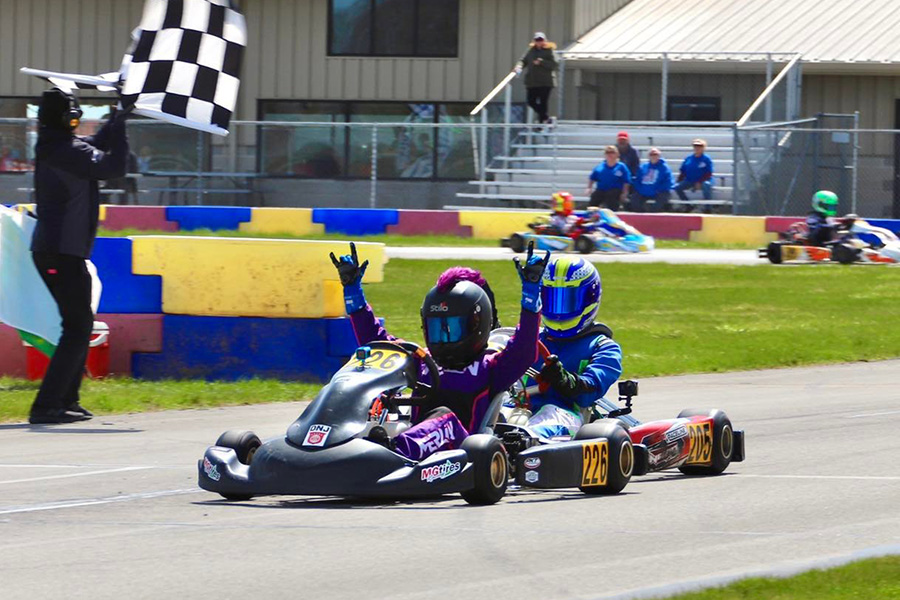 Ragan continued to hold the top spot to begin Round Two, setting fast time in qualifying. Ragan and Warren fought for the top spot throughout the Prefinal until Hanssen was able to grab the top spot and the win. In the Final, Malachi Haight stepped up to challenge Hanssen for the top spot. In the final two laps, the two exchanged the lead before Hanssen secure the position and took the victory. Haight settled for second with Warren in third. Cody Lindstrom was fourth with Jackson Wolny in fifth.

The DNJ Intermodal Services Mini Swift class also welcomed two new winners to the series. Saturday’s action was swept by 2021 Micro Swift champion Ethan Tovo. In qualifying, Tovo posted a lap eight tenths quicker than anyone in the 12-driver field. He led all eight laps of the Prefinal before challenged by Landon Buher in the Final. Buher led a few laps in the middle portion of the race before Tovo drove away to a near two-second gap at the checkered flag. Sarah Bradley won the fight for third ahead of Isaac Malcuit and Jackson Tovo. 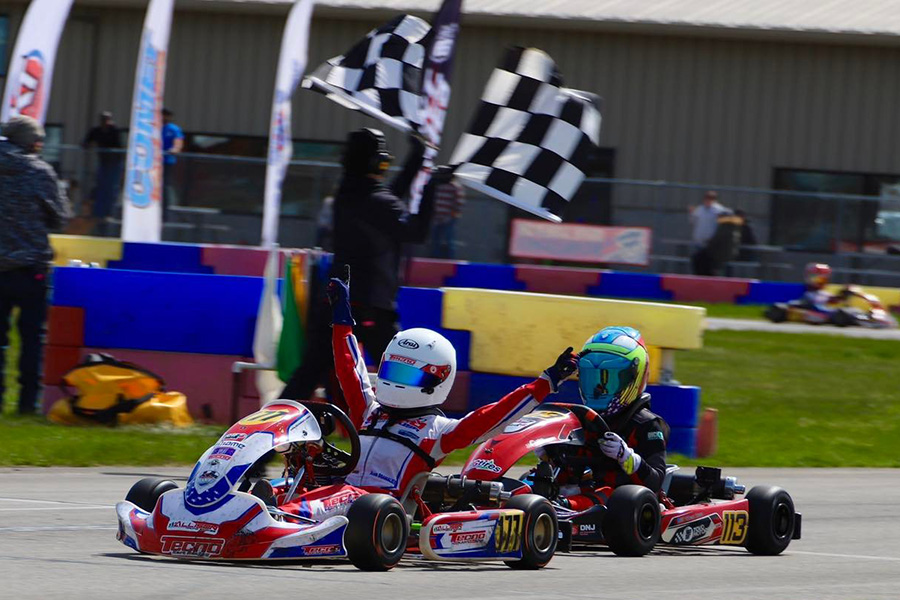 Acen Dramaliev found speed overnight and set fast time in qualifying for Round Two. He and Tovo battle for the Prefinal win with the Saturday winner able to grab the top spot in the end. They fought again in the Final, this time with Dramaliev performing a last lap pass for the victory, his first at the series. Buher ended up third with Malcuit again in fourth with Brady Schad placing fifth.

Elam Stoner was a double winner in the return of Kid Karts sponsored by B&B Electric. Stoner swept both rounds on the weekend ahead of Indy Davis and Pepper Davis. Adam Maxwell was the lone entry in the CKT Racing Engines Briggs 206 Heavy class to double up in the win column.

The Route 66 Sprint Series returns to action on June 18-19 at the Mill-Rite Raceway – home of the Badger Kart Club – in Dousman, Wisconsin for Rounds Three and Four of the 2022 championship program. 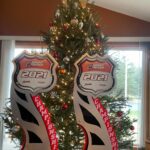