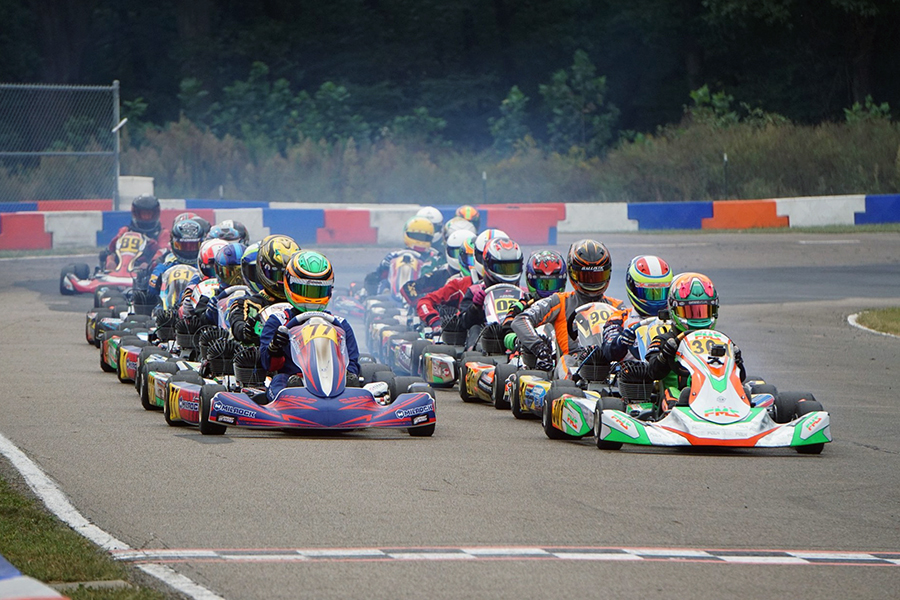 The final chapter of the Route 66 Sprint Series – presented by MG Tires and Franklin Motorsports – was written on September 21-22 at the Mid-State Kart Club. The established organization welcomed series competitors to their club-owned circuit in Springfield, Illinois, taking on the 1/2-mile layout. All competition sessions were contested on a dry surface after a light rain hit the area Saturday morning. A threat of severe weather on Sunday helped to speed up the schedule, completing all on-track sessions before 1pm. The program hosted Rounds Nine and Ten, the final two rounds of the schedule to help decide the 2019 champions.

The competition continued to increase as the season went on in the Bromberek Racing KA100 Senior division, featuring 26 drivers at the finale. X30 Senior top driver Brandon Lemke made his first start on the season in the category, recording fast lap in qualifying and leading all 14 laps of the Prefinal ahead of three-time winner Josh Hotz. The two exchanged the lead a number of times in the Final, with Hotz able to escape with the top spot and victory for his fourth win on the year. Lemke settled for second with Round Eight victor Alexander Kardahsian having a front row seat in third. Armin Cavkusic was fourth in his class debut while Round Seven winner Stephen Dial was fifth. 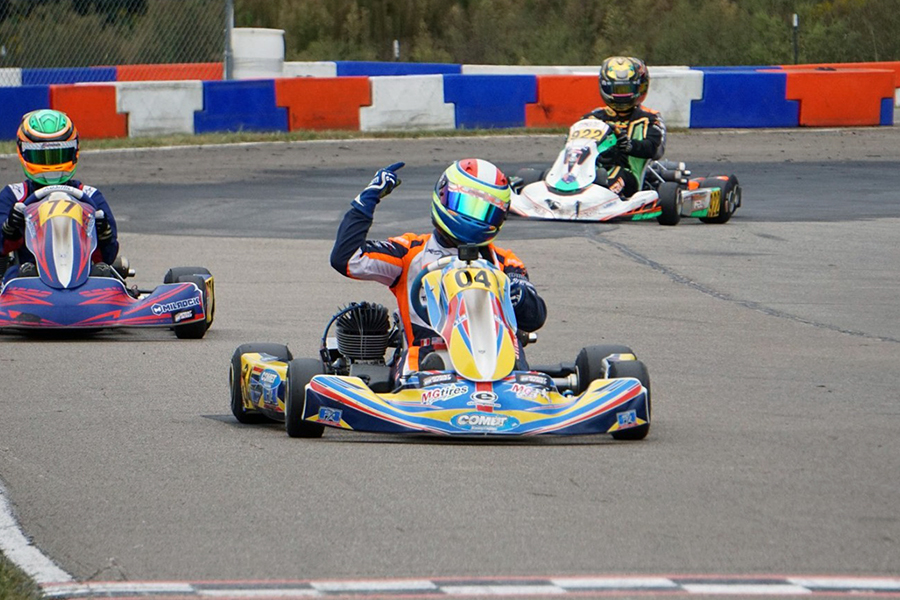 Hotz picked up where he left off on Saturday, setting fast time in qualifying for Sunday’s action. He dropped down to fourth in the Prefinal as Brandon Lemke came from that position on the grid to win. Texan Alejandro Jaramillo, making his first start in the series, followed him up to finish third behind Dial. Lemke led the majority of the race until a mechanical issue put him on the sidelines after the halfway point. That moved Hotz into the lead briefly until Jaramillo took control. Leading the final six laps, Jaramillo grabbed the victory. Dial slipped past Hotz for the second step on the podium with Colton Ramsey fourth and Brad Brittin rounding out the top-five at their home track. Hotz secured the championship over Kardashian with Dial in third.

It was a near sweep for Zach Collins in the BBS Technologies KA100 Junior class. Saturday was a perfect effort for Collins, earning fast time in qualifying and leading all the laps of the Prefinal and Final. Collins capped the day off with fast laps of the main event, winning by 1.1 seconds over three-time winner Nicholas Terlecki. Camrin Cass completed out the podium with Bryce Mersberger fourth and Macy Williams fifth. It was Round Four winner Joshua Carlson that broke up the perfect weekend for Collins. Carlson posted the quick lap in qualifying, edging out Cass and Collins by 21 thousandths. The session was tight, with the top-seven all within eight hundredths. Collins worked his way up to the point by lap five of the Prefinal, going on to win. From there, he led all 22 laps of the Final for his second victory. Adam Maxwell was second with Mersberger, Carlson and Cass completing the top-five. Terlecki grabbed enough points on the weekend to claim the series championship. Lucas Smalec was unable to improve his point total on the weekend, ending up second with Collins up to third after missing the opening event on the season. 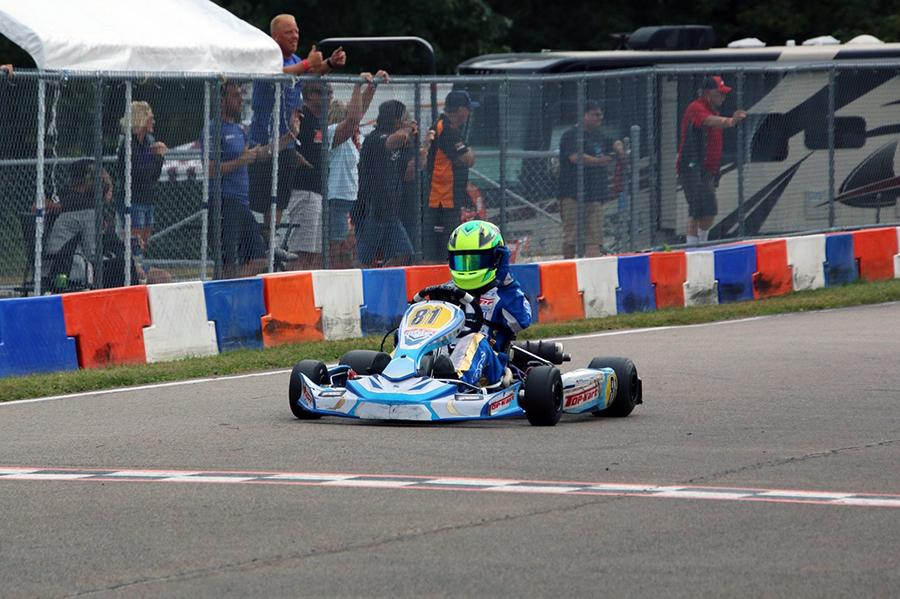 Austin Jurs was able to claim his first career victories in the Allison Racing Engines Mini Swift category. Jurs began the weekend edging out four-time race winner Cameron Brinkman for the top spot in qualifying. Brinkman was able to take over the top position in the second half of the Prefinal to go on and win. They swapped the lead a number of times in the Final until Jurs secured the position to earn his first victory. Brinkman settled for second with Ava Dobson joining them on the podium. Round Six winner Dan Sensel edged out the field in qualifying on Sunday to break up the Jurs/Brinkman show. It was short-lived as Jurs jumped out to the point and led all 14 laps of the Prefinal with Brinkman coming through the field to second after a DQ in qualifying for coming in underweight. Brinkman assumed control for the first half of the main event until Jurs reclaimed the position. The race came down to a photo finish with Jurs holding off Brinkman by 99 thousandths at the line. Aryton Grim recorded his first podium in the Mini category with his third place run. Brinkman and Jurs finished 1-2 in the final point standings with Dobson ending the season in third.

The One Powersports Micro Swift class was one of the largest throughout the season, finishing 2019 with 14 drivers in Springfield. Ava Hanssen scored her second victory of the year on Saturday. Four-time winner Levi Copass set fast time in qualifying before Hanssen led the majority of the Prefinal for the win. She led the first 11 laps until challenged by Copass for the top spot. He led just one circuit before Hanssen took back the spot and led the remainder to the checkered flag. Two-time winner Indy Ragan slipped past Copass for the second spot, with Austin Olds fourth and Dane van Dyck in fifth. Ragan started Sunday at the top of the time sheets in qualifying with Brayden Zirves off by only 82 thousandths. Indy led the first three laps of the Prefinal until Zirves took control and went on to win. Zirves slipped down the order as Ragan led all 18 laps for a third victory on the season. Olds was second with Hanssen completing the podium. Copass and Van Dyck rounded out the top-five. Copass was top-five in all 10 main events to earn the class championship, beating out Ragan and Hanssen. 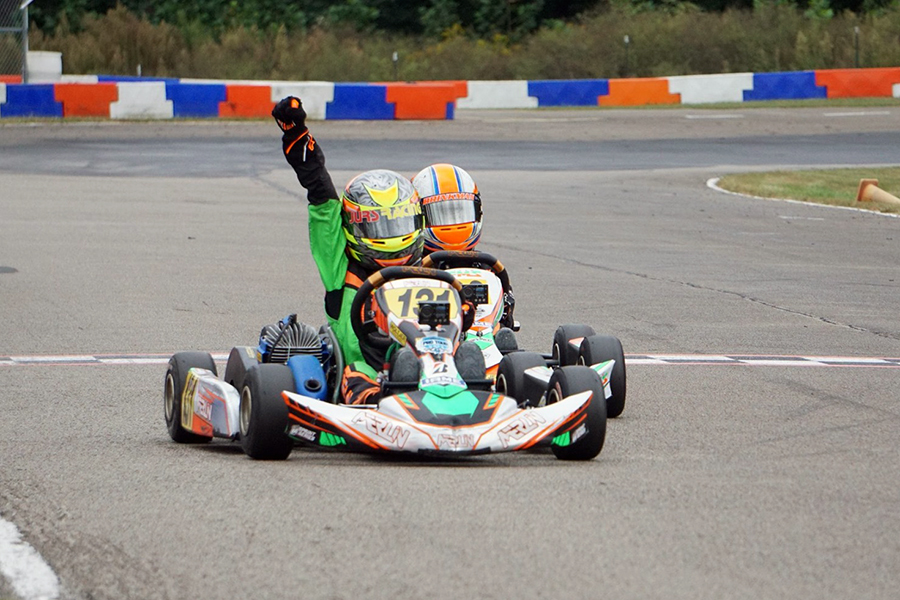 Andrew Patterson was able to leave Springfield with two victories in the new Briggs & Stratton 206 Senior class, but not without a challenge. Hunter Peri and Brian Rettig put on the pressure all day Saturday, however, Patterson was able to sweep the action. Peri ran second at the checkered flag with Rettig in third. Sunday began with Peri posting the fast lap of the qualifying session. He led the opening circuits of the Prefinal before Patterson took control for the win. It was the same in the Final, with Patterson leading the final 17 laps for the victory. The podium was the same with Peri second and Rettig in third.

It was a weekend sweep for Carter Pryor in the Briggs & Stratton 206 Junior division. Pryor, who won both main events in Norway, went on to complete each on-track session in the top spot. On Saturday, Pryor led all 22 laps for the victory in the main event over Griffin Kimbrel. On Sunday, Kimbrel led the majority of the Final, but Pryor came across the checkered flag first for the win. Loren Johnson was third place in both main events. Jase Petty won the main event both days in Briggs & Stratton 206 Cadet ahead of Dane Sensel. 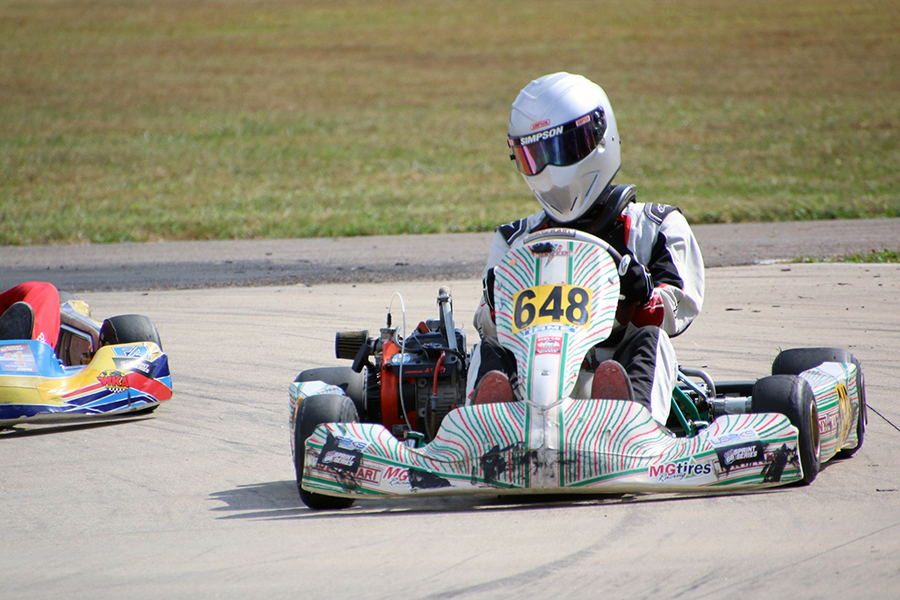 Brandon Lemke drove to his seventh and eighth victories on the year in the Merlin Nation X30 Senior class. Lemke set fast time Saturday in qualifying with Hunter Peri winning the Prefinal. Lemke came back to lead all 22 laps for the victory in the Final over Peri and Dylan Gerding. Sunday was all Lemke as he swept the action on the day with Peri and Gerding in the same positions on the podium. Lemke locked up the championship with Peri second and Gerding in third. The duel continued in the Woltjer Racing Engines X30 Junior class between Adam Maxwell and Nathan Nicholson. Maxwell was able to get the better on Saturday after setting fast time in qualifying. Nicholson won the Prefinal but retired in the main event, allowing Maxwell to earn his third victory of the season. Sunday was all Maxwell, sweeping the final round ahead of Nicholson to close out the series.

The 2019 Route 66 Sprint Series Championship Banquet and Awards Ceremony will take place on November 2, moving to the Northfield Inn & Suites in Springfield, Illinois. Tickets include a two-hour social time filled with snacks, hor d’oeuvres and complimentary drinks followed by dinner and the awards portion of the evening. Price is $50 per person for those 12 years-old and up, only $25 for children 6-11 with 5-years and under free.