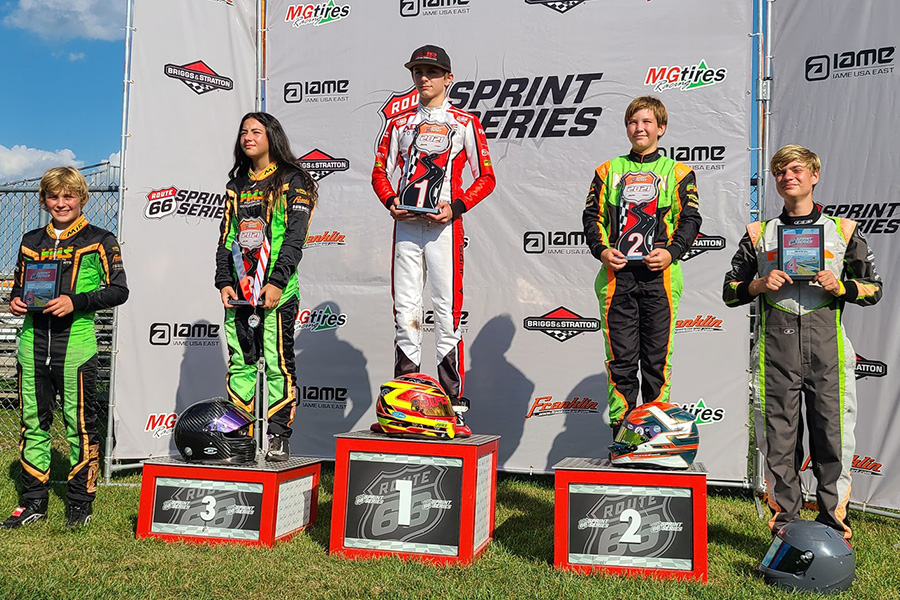 The Route 66 Sprint Series – presented by MG Tires and Franklin Motorsports – hosted the fourth and final event of the 2021 program at the Wolf Paving Raceway in Dousman, Wisconsin over the September 17-19 weekend. The home of Badger Kart Club saw Round Seven and Eight contested around the historic circuit, welcoming over 100 entries for the series finale. The two-days of racing helped to decide the seven class champions for the 2021 season.

The Woltjer Racing Engines KA100 Senior class averaged over 30 drivers on the season, welcoming 39-strong for the finale. Alex Bertagnoli earned his second pole position of the year to begin Saturday, edging out championship leader Brandon Lemke by 25 thousandths. The top-four was separated by only 93 thousandths with Round Four winner Alexander Kardashian third and Zach Della fourth. Bertagnoli led the beginning of the Prefinal before Lemke and Josh Hotz took turns. Alex grabbed the point at the end to score the win. Hotz was the driver to jump out to the lead in the 16-lap Final, showing the way for 10 laps before Lemke took over. They would run 1-2 as Lemke took his third straight feature win, fourth on the year. Hotz grabbed his best result of 2021 with the runner-up as Bertagnoli beat out Kardashian and Nicholas Terlecki for the third spot. Keegan Bosch was quick Saturday, earning fast time in his drive from the back to mid-pack in the feature. He carried that speed over to Sunday with fast time in qualifying to edge out Lemke by 95 thousandths. Bosch led all 10 laps of the Prefinal for the win and ran away in the Final, driving to a 1.6-second advantage over 16 laps ahead of Lemke for his first victory of the season. Kardashian drove to third with Hotz fourth and Chase Jones posting fast time in his fifth-place effort. 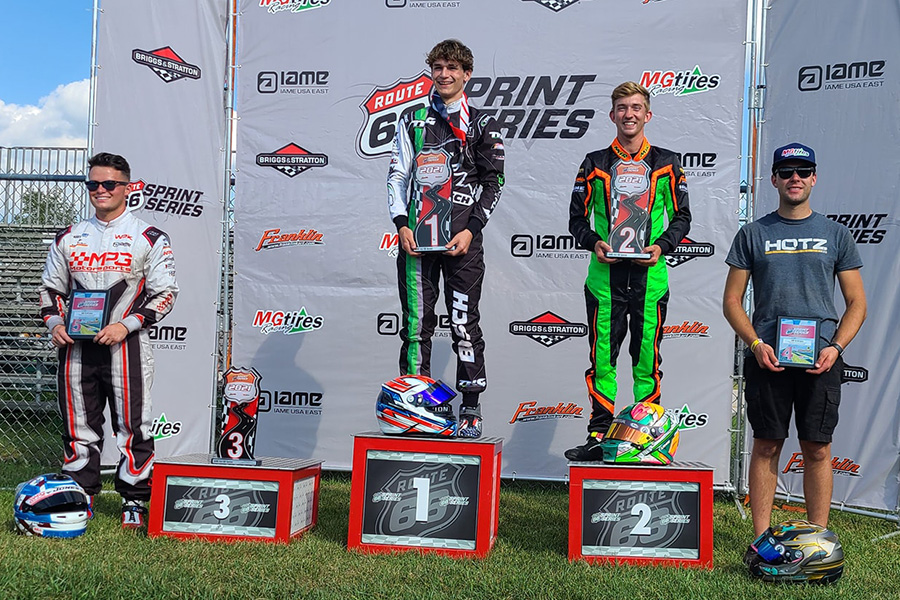 With four wins on the year, Lemke secured the series championship by 86 points over Kardashian. Terlecki finished the year in third with Hotz in fourth and Bertagnoli in fifth.

Five other categories on the weekend were swept in the win column, including four wins over the two days of racing for Junior driver Austin Jurs. It was a near weekend sweep for Jurs in the KA100 Junior by BBS Race Engine Development division. Jurs led every lap of the Prefinal and Final to record his fifth victory on the year, driving away to a 10-second advantage. Ava Dobson beat out Quinten McPherson for the second spot ahead of Oliver Cunningham and Tripp Hiller. Dobson broke up the Jurs perfect score on the weekend with fast time in Sunday’s qualifying as Austin was back in fifth. He quickly returned to the point, taking over the lead on lap two in the Prefinal to grab the win. Jurs led all 16 laps of the Final to close out the season with a victory. McPherson finished second ahead of Dobson with Cunningham and Hiller closing out the top-five.

The six wins over the eight rounds helped to lock up the championship for Jurs. Dobson finished second, trailing by 243 points. Rounding out the championship podium is Cunningham, McPherson and Hillier. 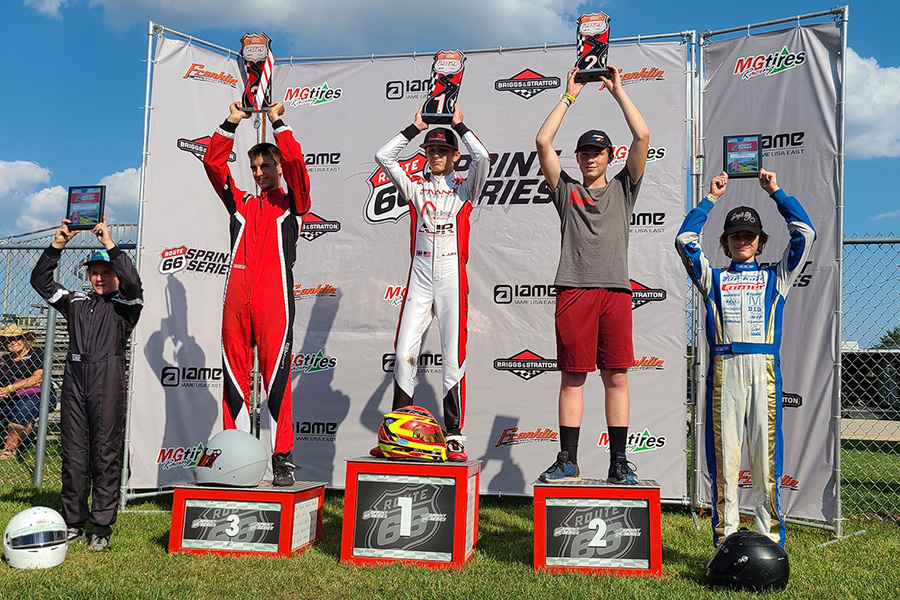 Four of the nine drivers in the Advance Design Studio Briggs 206 Junior category made their first starts of 2021, including Jurs, who won both main events. Evan Hanson, also making his first series start, set fast time in qualifying. He and Jurs battled for the lead in the Prefinal until Lukas Klimek came through to grab the race win. The main event was all Jurs, as he grabbed the lead on the opening circuit and led all 16 laps. Luke Wackerlin was a close second at the checkered flag with Klimek third and Miller fourth. Clayton Slipher completed the top-five. Hanson was P1 in qualifying once again on Sunday, quicker by 83 thousandths then Klimek. Jurs was third and jumped to the point at the start of the Prefinal, leading all 10 laps. In the Final, Jurs led all 16 laps for a second victory in the category on the weekend. Wackerlin repeated as runner-up over Hanson with Klimek fourth and Zach Kubinski fifth.

In the championship battle, Klimek racked up the most points in the best six of eight format, earning the series championship. Wackerlin finished second overall, back by 81 points. Miller ended up third with Brian Vacek fourth and Bacon Zelenka fifth. 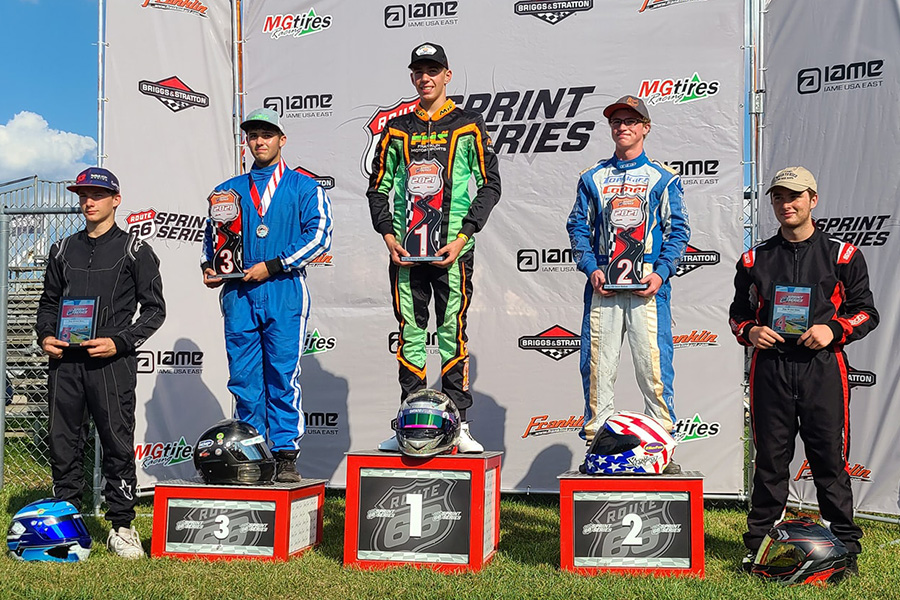 Bryce Mersberger wrapped up a phenomenal season in the Briggs 206 Medium by RLV category with two victories at Badger. It was a near weekend sweep for Mersberger, which began with a perfect score on Saturday. Mersberger set fast time in qualifying and led all 10 laps of the Prefinal. He and Jerry Fandrey went back and forth for the lead in the Final, with Mersberger reaching the checkered flag first by 66 thousandths. Nathan Trapp was third with Brian Rettig fourth and Randy Westlie fifth. Fandrey broke up the perfect run for Mersberger with fast time in qualifying on Sunday. He led all but the final two laps of the Prefinal with Mersberger taking the win. They battled once again in the 16-lap Final, as Mersberger was able to secure the lead in the final two circuits for his fourth victory on the season. Trapp worked by Fandrey for the second spot with Myles James and Peyton Polarek rounding out the top-five.

In his championship performance, Mersberger never finished a session outside the top-three over the eight rounds of racing. He earned the title by 219 points ahead of Fandrey. Trapp finished the standings in third with Rettig and Polarek completing the top-five for 2021. 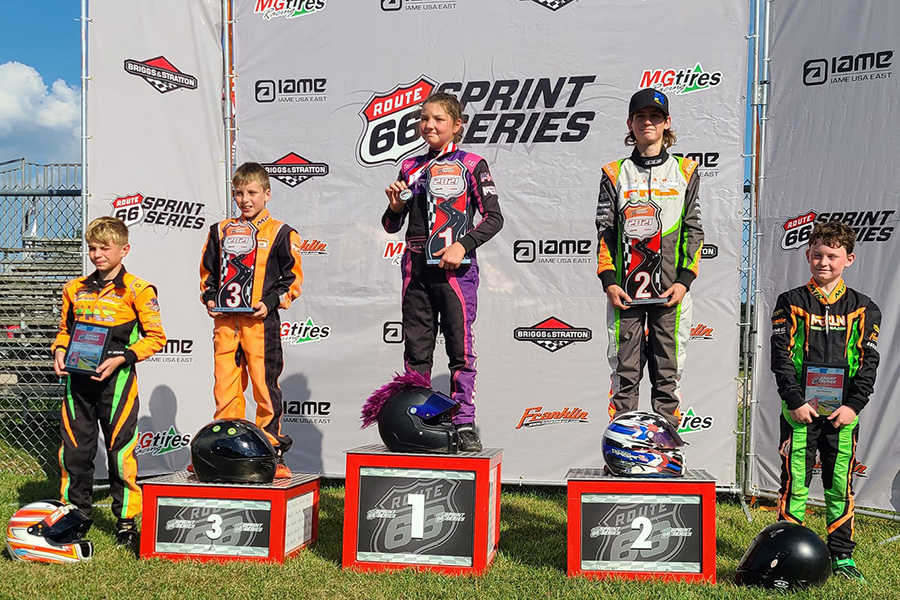 For a third time on the year, Ava Hanssen doubled up in the win column for the One Powersports Briggs 206 Sportsman class. Hanssen cleared the 15-driver field by two tenths in qualifying. She led the opening laps of the Prefinal until getting shuffled back to third as Brady Schad scored the win. Hanssen jumped back to the point to begin the 16-lap Final, challenged in the middle portion by Keelan Harvick. He led for six laps before Hanssen resumed as the leader, going on to score the victory. Indy Ragan slipped by Harvick for the runner-up spot with Schad in fourth and Brayden Zirves fifth. Hanssen matched her qualifying performance on Sunday, as did Schad in the Prefinal. In the Final, Hanssen started third and was into the lead by lap three. From there, she led the remainder of the race to claim her seventh victory of the season. Ragan was only 34 thousandths short at the line from stealing the victory away. Schad was third with Benym Abernathy fourth and Zirves repeating in fifth.

Seven wins and eight straight podium finishes put Hanssen on top of the podium in the class championship for 2021. Schad ended up second in the standings, 232 points back with Sarah Bradley putting two female drivers inside the top-three. Jase Petty and Indy Ragan round out the top-five in the championship chase. 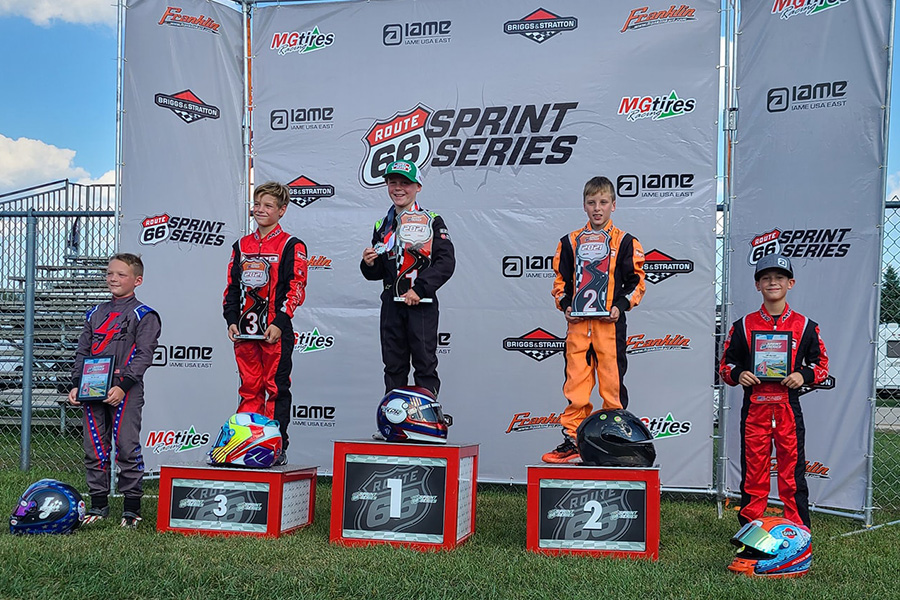 Harvick did get on top of the podium on the weekend, twice in the DNJ Intermodal Services Micro Swift class. He began fifth in qualifying on Saturday as two-time winner Brady Schad cleared the field by two tenths. Schad led nine of the 10 laps for the Prefinal as Harvick drove up to second. It was Schad at the front until about the halfway point when he retired. That allowed Harvick to take over, driving away to a 2.5-second victory. Benym Abernethy won the fight for second ahead of Jackson Tovo and Landon Buher with three-time winner Ethan Tovo in fifth. Harvick turned up the wick on Sunday, sweeping the action. He cleared the field by four tenths in qualifying before leading nine of 10 laps in a Prefinal win. Abernethy put on an early challenge to Harvick, but fell down the order toward the end of the race. Harvick drove to his third win on the season. Schad advanced to second with Ethan Tovo in third. Jackson Tovo and Buher completed the top-five.

Three wins and three additional podium finishes helped to put Ethan Tovo on top of the championship standings. Only 34 points back was Schad in the standings. Jackson Tovo finished third with Abernethy and Buher ending the season fourth and fifth. 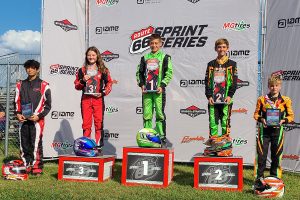 The Mills Pallet Mini Swift division saw two drivers stand on top of the podium at Badger. Round Two winner Sarah Bradley opened up the weekend with fast time in qualifying. She edged out two-time winner Cash Perkins and Brayden Zirves by 47 thousandths. All three led in the Prefinal with Perkins showing the way for the final five circuits for the win. He and Zirves swapped the lead to open up the 16-lap Final until Perkins secured the top spot. He led the final 12 laps for his third victory of the season. Zirves was second with Ava Hanssen in third. Acen Dramaliev was fourth with Cade Jaeger in fifth. Four drivers were within 84 thousandths after qualifying on Sunday with Zirves in the P1 position. Bradley was fourth in the session, and charged forward in the Prefinal to come away with the win. It was Perkins however that jumped out to the lead in the Final, leading the opening 15 laps. Jaeger made a last lap pass stick, reaching the finish line first by 86 thousandths to score his first victory of the season. Perkins settled for second with Bradley in third. Zirves and Gian Buffomante completed the top-five.

A total of six podium finishes on the season helped to put Perkins in the P1 position for the series championship. Bradley ended up 155 points back in second with Zirves edging out Indy Ragan for third with Hanssen in fifth.

Details surrounding the 2022 Route 66 Sprint Series program are to be released in the coming days. 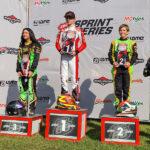