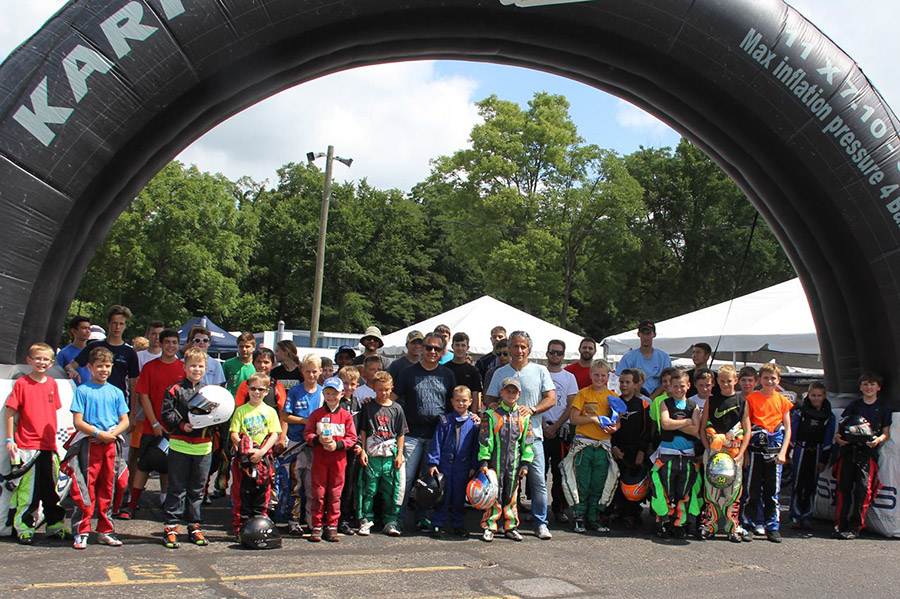 It was a weekend of firsts for many at the third event of the 2016 Route 66 Sprint Series. After a long month of racing for racers in the midwest, the top regional program in the country returned to action on July 29-31 at the famed Michiana Raceway Park. Wet weather hit the facility during move-in day, and stayed away for the reminder of the weekend to provide perfect racing weather for the over 130 daily entries. As one of the only major events to hit the North Liberty, Indiana facility on the year, a number of competitors took part, with a handful of first time winners leaving the Hoosier state a Route 66 Sprint Series winner. 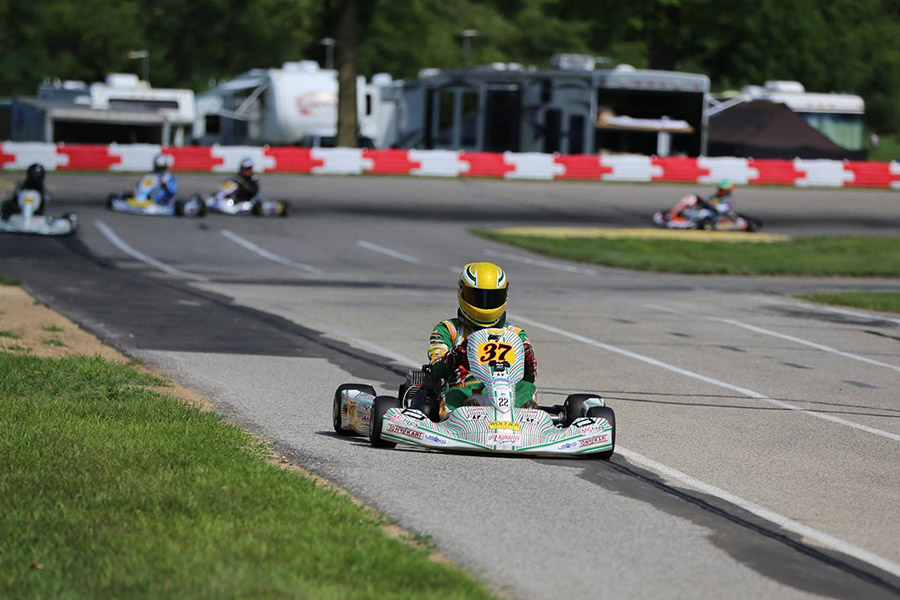 Adam Crepin was able to end the win streak of Dakota Pesek in the RLV Yamaha Senior category, grabbing his first win of the season. Crepin entered the weekend with as many podium finishes as point leader Pesek, with two third-place results and two runner-up finishes. Saturday was all Crepin as he swept the day for his first victory of the season. Crepin got the edge in qualifying by just 23 thousandths over Collin Griffin with Pesek back in the fifth position. Griffin challenged in the Prefinal, only to see Crepin take the checkered flag first as Pesek drove up to third. Crepin turned the wick up for the Final, pulling out to a big lead early and maintaining it for all 12 laps for the victory. Griffin held off Pesek for the second spot with Brennan Harrington placing fourth in his return behind the wheel, just ahead of Darin Marcus.

Sunday was a battle to the very end. Crepin took fast time in qualifying ahead of Marcus and Griffin as Pesek was classified in ninth. A four-kart lead group formed in the Prefinal with Killian Keaveny joining the top three qualifiers. Griffin was able to come away with the win over Marcus and Keaveny with Crepin coming short of the checkered flag after losing his can muffler. Pesek had advanced to the fifth position, putting him in reach for the main event. A great opening two laps had the four-time race winner advance into the lead. From there, Pesek led the remainder of the race for his fifth victory on the season. Crepin climbed his way from 19th on the grid to second, capping off an amazing weekend. Marcus completed the podium in third with Harrington fourth and PJ Lyda in fifth. 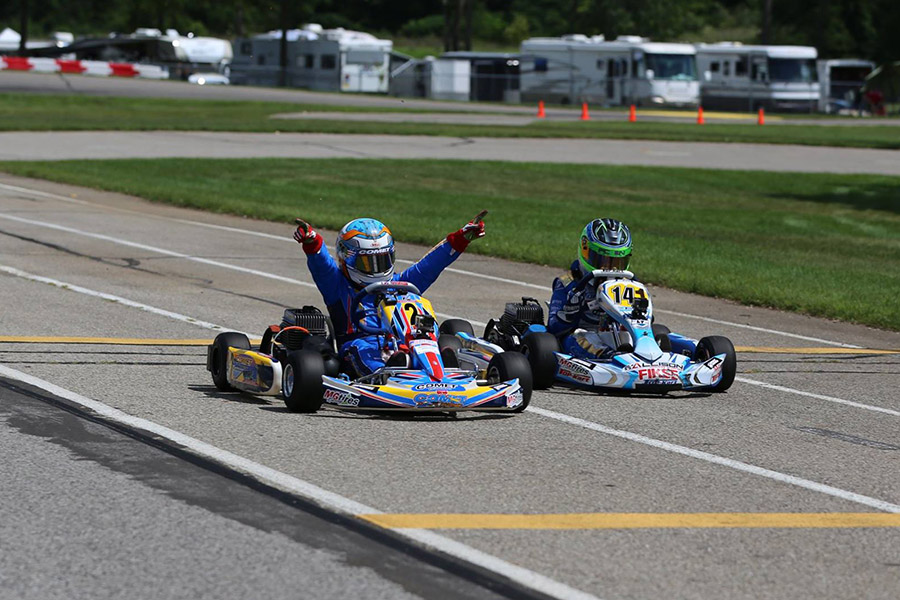 The largest group on the weekend was the Switch Racing Engines Yamaha Cadet division featuring 28 drivers. Kyle Thome and Logan Adams were able to come away with their first victories on the season, helping to tighten up the championship chases. Kaden Wharff and Lucas Smalec were the top drivers Saturday after qualifying and Prefinal. Wharff was shuffled back in the Prefinal and also penalized, pushing him into the middle of the field for the Final start with Smalec and James Lynch filling out the front row. The first start attempt ended with a red flag involving a number of drivers, including a flipping Ben Chejfec. The race resumed with Smalec and Lynch taking turns at the point until Conner Churchill assumed the top position. The following lap, Thome completed his driver from outside the top-five to take the lead, showing the way for the remaining laps of the race for his first victory of the season. Taylor Maas followed through to finish second ahead of JJ Hansen. Churchill and Smalec completed the top-five.

Wharff came back Sunday after the DNF in the main event to lead the way for the majority of the round. Fast time in qualifying was followed up by the win in the Prefinal. Adams joined Wharff at the front and the two were nose-to-tail for the 12-lap Final. Adams made his move on the final circuit, and beat Wharff to the checkered flag by five hundredths of a second. Smalec was third with Nic Sheppard fourth and Parker Abed in fifth. 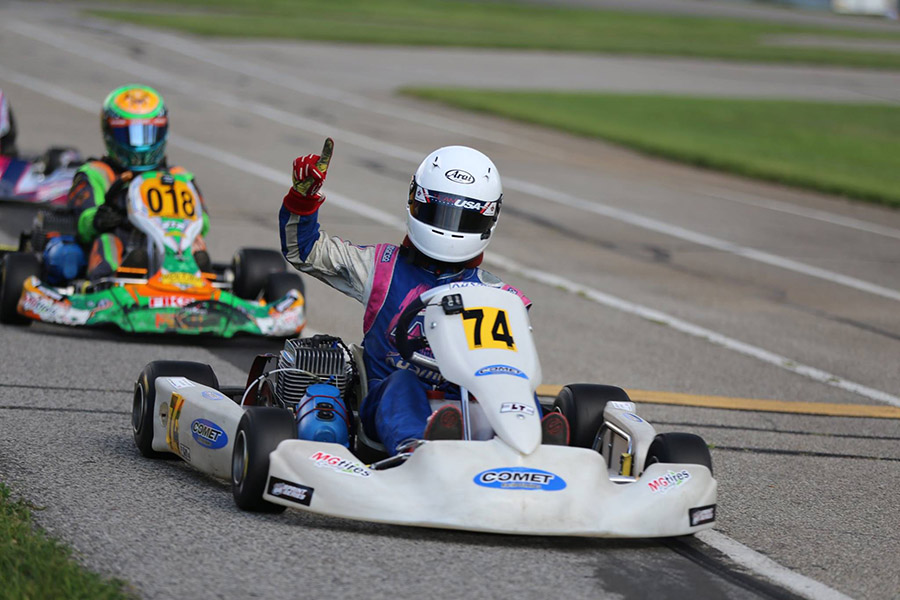 The Woltjer Racing Engines Yamaha Junior class also welcomed a first-time winner with Aidan Harrington notching his first two Junior victories. Harrington sat in the top-five through qualifying and the Prefinal, battling with Prefinal winner Austin Schaff and Michael Paterno for the lead throughout the Final. At least five lead changes in the 12-lap event occurred at the stripe, coming down to Harrington reaching the checkered flag first over Schaff and Paterno. Shawano double winner Matthew Northrup was fourth with top qualifier Greg Della in fifth. Harrington started Sunday where he left off, setting fast time in qualifying. Northrop got the advantage in the Prefinal, only to see Harrington and Paterno get away at the end of the Final. Paterno led for most of the race until Harrington led the final three circuits for his second victory of the weekend. Dillon Schwanbeck pushed Northrop back to fourth with Della placing fifth once again.

TJ Koyen jumped back to his winning ways in the Merlin Racing Karts IAME Senior division, taking the top step of the podium both days. Koyen swept the weekend for his third and fourth victories of the season. Mick Gabriel took the top spot from Koyen at the start of Saturday’s Final, leading for four laps until Koyen reclaimed the position, driving off to a three-second advantage at the checkered flag. Double Shawano winner Josh Hotz worked his way to second ahead of Gabriel with Adam Crepin and Kindra Hurlbert making up the top-five. Sunday was Hotz’ turn to challenge Koyen, jumping out to the lead in the Final. Koyen made his move on lap six, and drove away to victory once again. Hotz was nearly three seconds back at the checkered flag with Gabriel joining them on the podium once again. Crepin was fourth with Matt Stagl in fifth. 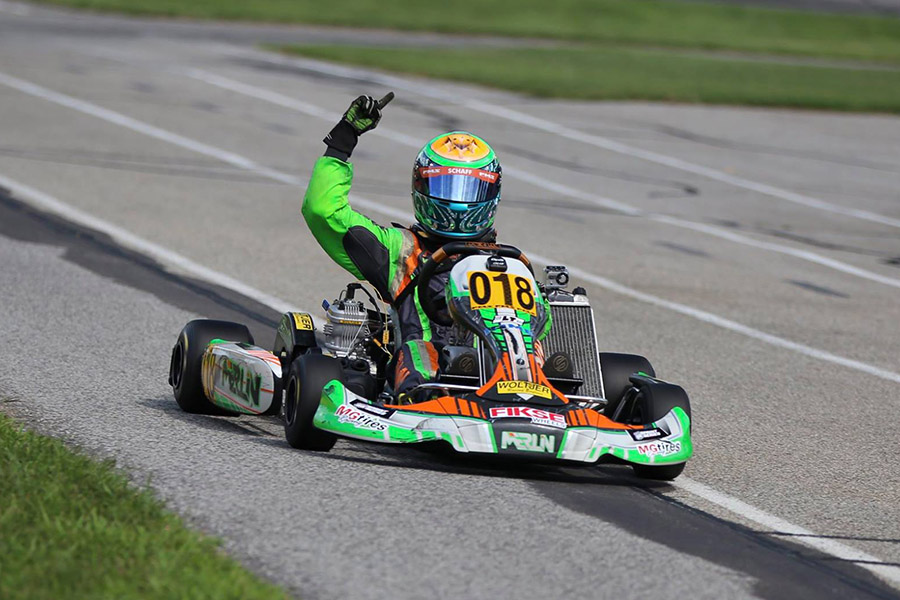 Kart Craft IAME Junior class welcomed a weekend sweeper in the form of Austin Schaff. Winless in the category on the season, Schaff put in a perfect score in South Bend after sitting out Shawano. Schaff led all 12 laps toward a three-second advantage at the checkered flag over point leader Steven Dial and Round Three winner Maks Kowalski. Tahlon Yockel and Michael Paterno completed the top-five. It was the same on Sunday, with Schaff leading all on-track sessions, including a second victory of the weekend by over three seconds. Dial won the battle for second over Kowalski with Yockel and Max Peichel in fourth and fifth.

>Elliot Cox kept his win streak alive in the Williams Racing Engines Yamaha Rookie category, recording wins five and six on the year. Cox swept Saturday’s round of racing from qualifying to the final checkered flag, edging out Christian Miles with Trevor Johnson joining them on the podium. Miles looked to have the streak ended after coming through as the top qualifier and Prefinal winner Sunday. He led the first half of the Final until he was shuffled to the tail of the field at the midway point, allowing Cox to cruise to the victory. Kasey Williams ran second with Ava Dutton on the podium in third. 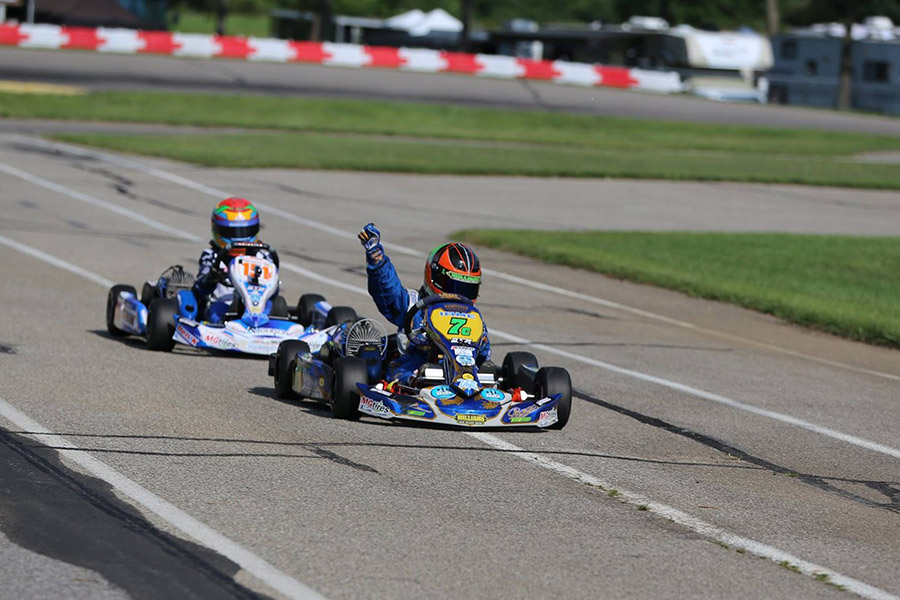 Christian Miles came away with his first two wins of 2016 in the Express Karts & Parts IAME Swift Rookie class. Evan Zarbo was the driver to beat early on Saturday, with Miles leading all but two laps en route to his first series victory. Elliot Cox followed him through for second with Zarbo placing third. Cox was the top driver early on Sunday, leading qualifying and the Prefinal. Miles turned up the wick for the main event, taking the lead on lap four and pulling away to a four-second advantage over Cox with Ryker Mattes completing the podium.

Four different drivers have now stood at the top of the Allison Racing Engines IAME Swift Cadet podium in the six main events. Kaden Wharff returned to the top step, earning his third victory of the year while Taylor Maas recorded her first. Maas was the dominating driver throughout the weekend, leading the way Saturday with fast time in qualifying and a Prefinal win. Wharff was able to have the better speed at the end of the day, beating out Kyle Thome and Maas for the victory with James Lynch and JJ Hansen completing the top-five. Maas returned Sunday with the same early speed, holding it on to the very end. She led all 12 laps of the Final to land the victory ahead of Thome and Wharff. Logan Adams was fourth with Aidan Hinds placing fifth. 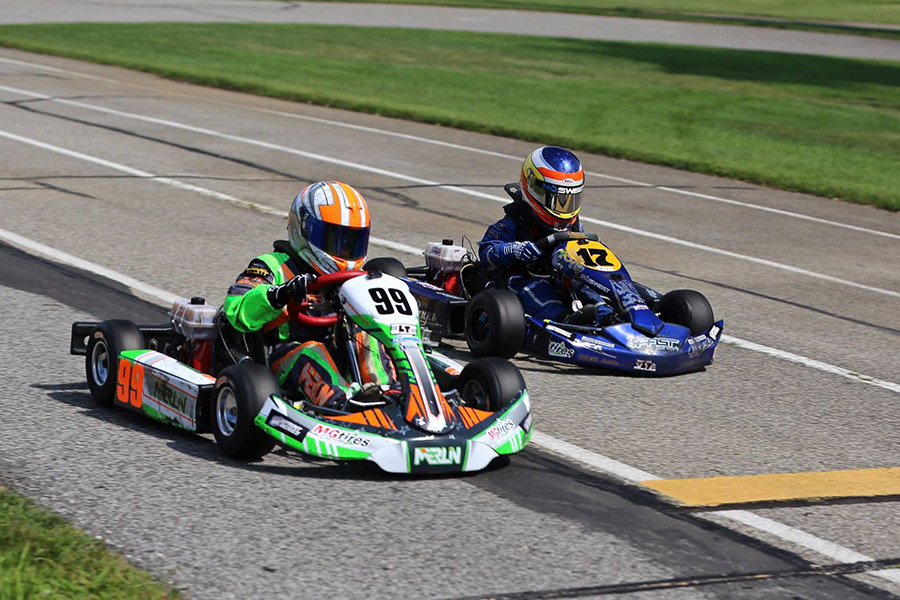 Cameron Brinkman and Indy Ragan split the wins in the Hollywood Crane Service Kid Kart division. Brinkman stole a perfect day for Ragan on Saturday, edging out Indy at the checkered flag by just 87 thousandths after eight laps. Dane Van Dyck drove to the third position. Ragan swept the Sunday round, holding back Brinkman with Austin Olds placing third.

The Route 66 Sprint Series continues their 2016 season with a trip back to Wisconsin, visiting the Briggs & Stratton Raceway Park in Dousman – home of the Badger Kart Club – on August 12-14. Online registration is currently open. 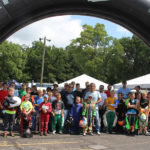